2 from 2 over the Easter period sees Dragons go sixth

The Dragons finally managed to string two performances and two results together over the Easter period.

A potentially tricky looking away journey to London (who we could well have played into form) was navigated with consummate ease and no little flair, before a below par Castleford were swept away at the Stade Gilbert Brutus.

The London match has always been a special one for us Southern Englanders and despite me having moved further North in recent times, I want us to beat them.

In fact I've been annoyed with the Broncos since my first visit to watch them play Dracs at the Stoop many years ago when a loud woman behind me kept advocating that Louis McCarthy-Scarsbrook "smash people into next week".

The following Easter was my first Sang-et-Or assignment on the Twitter feed and I incurred the wrath of the Dureau family when I criticised a missed conversion from Scott. Libby and Dennis were soon replying to my output and it was a valuable lesson learned!

We did get to meet Damian Blanch after the game which was a dream come true for me being a massive fan boi.

I seem to remember the final year of their previous Superleague spell saw them playing at Barnet (with I think Tony Gigot and Josh Drinkwater in their side) and a win for Dragons that was far closer than it should have been.

Olivier Elima was the hero we met after the game and its always worth mentioning that the picture of my wife and he still adorns the coffee mug she uses each morning.

This one was over well before the end of the game with Matt Whitely starring and scoring two tries along with an eye catching display from Arthur Romano.

We should have kept them off the scoreboard to be honest, but aside from some excellent tries and running rugby, Eloi Pellisier getting sent to the sin bin against his former club was an amusing highlight.

The final game of the Easter period saw Castleford vist in a game that was memorable for the weather in the South of France reportedly being colder than the temperature the Tigers had left Yorkshire from.

Unlike a number of recent home matches, the Dragons got off to a good start and built a decent lead in the match thanks to a combination of strong forward running, a bit of flair at the back and aggressive defence.

The Tigers were weakened by injury, but to fair, so were we. We hope that this is a sign of a bit more consistency coming into the Dragons play. The idea that we will hit massive highs and scale horrible depths fills me with a bit of trepidation! 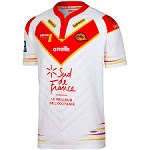